Posted at 16:54h in CatalogExpress, News & Facts by Fabian Fischer

MongoDB instead of PIM system? We can finally answer this question. At least in terms of retrieving the product data for creating electronic catalogs, supplying feeds from various marketplaces, and most recently for connecting various applications. By providing access from external systems to the databases where the product data is stored, the workloads can be moved off the main server and performance can be optimized for web and mobile applications. A standard interface is now available in CatalogExpress as a go-between system between MongoDB and the applications or even the specific export generation.

Our customers normally use CatalogExpress to connect with PIM and ERP systems. With the article master data and product data provided there, electronic catalogs are generated as EXCEL, CSV, JSON or, in the standard version, as BMEcat. In addition, data feeds from marketplaces such as amazon, Conrad or mercateo and general data structures for customer requirements and systems can be created. The new standard interface to MongoDB in CatalogExpress now makes it possible to merge data directly from MongoDB with other data. The setup is simple and quick by using the connection string, a database input and the chunk size. 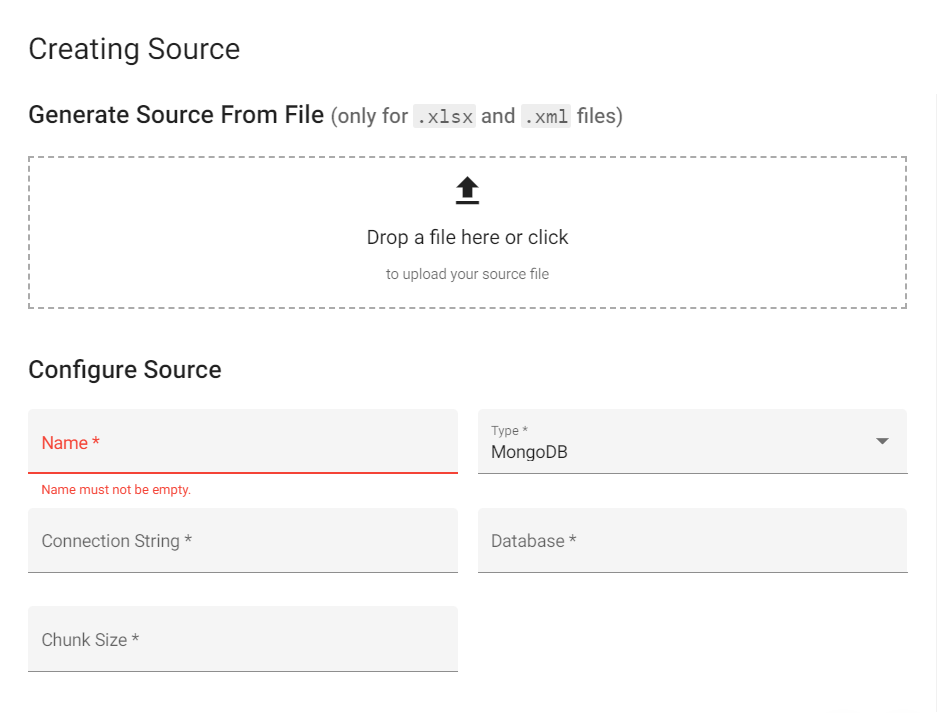 Setting up MongoDB in CatalogExpress

Why is MongoDB used as an alternative to a PIM system?
MongoDB is used in many companies around the world as a database for storing data, as a database service for specific applications, and also as the basis for content systems such as PIM systems. MongoDB is a powerful database system that is also free of charge. Companies benefit from MongoDB especially when large amounts of data are involved. The database, which can be used as open source, does not store the data relationally, but document-oriented, and thus differs from ordinary database systems. Here, the data is represented in various JSON-like documents and not in rows and columns (as in EXCEL files, for example).

Regarding the storage of product data, MongoDB offers various possibilities in the design of data structures and export definitions. With these possibilities, external systems no longer have to adapt to the requirements of a database. IT can process the data much more efficiently.

The great advantage of load balancing in MongoDB allows queries to be performed on the database without disruptions. The load balancing ensures that all applications do not negatively influence each other and that an automatic load balancing takes place.

Why is a standard interface to MongoDB useful?

In CatalogExpress, setting up MongoDB as a central data source is now quick and easy. The integrated standard interface to MongoDB supports our customers with a greatly reduced time between CatalogExpress setup and the use of data from MongoDB. The setup can be done directly by the customer. For this purpose, CatalogExpress enables the merging of data from MongoDB as well as from the PIM system and the ERP system. In this way, marketing, sales and eCommerce data as well as business process-relevant data come together.

Which use cases will be enabled by the standard interface to MongoDB?

Our customers usually use MongoDB as a supplement to the PIM system. For example, data from the PIM is transferred to MongoDB for specific purposes in order to achieve the load distribution. This means that other applications, which partly access the data live, do not have to access the production systems. Thus, the standard interface to MongoDB in CatalogExpress can be used to address another area of application in addition to the creation of BMEcat data, data feeds and other individual electronic catalogs. CatalogExpress then serves as middleware between MongoDB and a mobile application (app). The scaling capabilities of CatalogExpress and the performance of the standard interface to MongoDB as well as the aggregation in MongoDB deliver unrestricted and trouble-free querying and thus smooth operation of the applications.

At the same time, not only mobile applications and web applications can be supplied by CatalogExpress with article and product data from MongoDB. As a B2B data hub, marketplaces such as Conrad, amazon, mercateo, Unite and also industry portals or eProcurement platforms can be supplied with electronic catalogs such as a BMEcat with classifications such as ETIM or ECLASS.

How can you exploit the potential of the standard interface to MongoDB?

Do you have one or more use cases in your company that you want to implement with your MongoDB ? Or are you facing a challenge with your PIM system in terms of exports, classifications or interfaces and connections? Then feel free to contact us and book an appointment directly and easily here.[/vc_column_text][/vc_column][/vc_row]